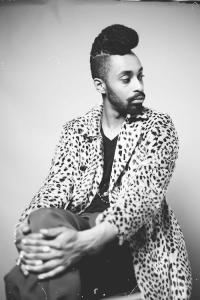 Mr Campbell (no period because it’s not the end it’s the beginning) is one half of the Boston-based hip-hop duo The Urban Nerdz. Originally from Maryland, I met Mr Campbell a few years ago when he was living in Alston, Mass with my then-girlfriend. I recently chatted with the man I originally knew as Aaron or Ace to talk about how The Urban Nerdz have developed and where they’re going. For more of The Urban Nerdz, follow them on Twitter at @TheUrbanNerdz, visit their website, Facebook or Soundcloud.

Rowan Kane: So who are The Urban Nerdz?

Mr Campbell: So The Urban Nerdz are a Hip Hop based duo/ Brand that myself MrCampb3ll and MrDubuisson, have created. Although I say “Hip Hop” based we like to consider our music as “Gumbo Music” because there are a lot of different music influences that we get from other genres

RK: Absolutely, it sounds like you draw influences from a bunch of different genres. Who would you say you draw your biggest inspiration from? If anywhere.

Mr Campbell: Ahhh it’s a bit Outkast, and Kanye… then a lot of UK music has recently been more of a current influence. Its a lot of different factors because honestly you have lyrical influence, then production influences. But those two are probably within our top influences

RK: Would you say that lyrics and production are on equal terms in your work? Of equal importance that is…

Mr Campbell: Well… yes, we ALWAYS have a direction when it comes to creating music even if its a simple subject matter like sipping and partying. We make sure that we write to the vibe/emotion that the instrumental gives

RK: A lot of your music, especially your Jezebel project is dripping in sexuality. Was that a direction that you focused on?

Mr Campbell: Haha “dripping in sexuality” thats an interesting way of putting that… well La Naissance De Jezebel (The Birth Of Jezebel) is a story about a woman named Jezebel who, long story short says “fuck the 9-5, fuck education I want to do what the woman do on the TV screen.” So we tell her journey about getting into the industry and some of the shit she has to deal with…

RK: Is that something you and/or Mr Dubuisson can relate to personally or are you telling a story?

Mr Campbell: Well actually the deeper/ underlining message of the EP is it is based on the 7 deadly sins which is why its 7 songs long. SO to answer the question, YES, and actually we can all relate to it some way some how if you really break it down! Example: “Let’$ Funk” is based on the sin “Lust”, we are all guilty of being lustful of others wether sexually or physically

RK: So are you talking to everybody when you make you music or do you have a specific type person or group in mind?

Mr Campbell: Naw, dude we write about the shit we witness in the world/personal reflection… its not till after we make the music when we think about how to brand/ and market it. Sometimes we come up with a concept first and produce and write the music around that concept

RK: You mentioned earlier that The Urban Nerdz are also a brand. Can you expand upon that?

Mr Campbell: Well when we call ourselves a “brand” that just means that we do more that just write music… We are also entertainers, fashionistas, business men, car lovers, technology Nerdz, etc. Our over all package has worth to it… Based on the qualities that we have and what we offer we are worth more than JUST our lyrics and music

RK: Artistic worth? Financial worth? Social? Do you even want to define that worht?

Mr Campbell: Naw, lets not define that, its gets too sticky when you add a definition/specifics to it. Because how we view our worth is sometimes different than how others view our worth

RK: I like that. I’ll ask about the worth of something else. What do you think is the worth of Hip-hop in society right now?

Mr Campbell: Hahaha You like that? I just thought of it… But the current stage of worth in Hip Hop….

Mr Campbell: Honestly I believe the worth is…. over payed, over rated… At one point corporations and niggas (excuse my slang) realized that it could be an actual profitable business without much effort. So with the down fall of the economy and the accessibility of music with technology, it is easier and more fun to be an artist versus applying for jobs that actually pay decent money. Perception is a huge thing as well.

RK: So you don’t really agree with the “I’m not a businessman, I’m a business, man” philosophy?

Mr Campbell: No no that is the mindset that one NEEDS to have going into this type of industry. That’s my favorite type [of] philosophy.

RK: So what do you mean when you say the worth is over-payed and over-rated?

Mr Campbell: Musicians are getting payed just to show up to events and parties…. just because of there name. Fame. Granted that is awesome for the artist because they are getting their money but… Shit is over rated because a lot of people don’t know how to deal with that and it no longer is about the music, but the lifestyle, brand, fashion, personality.

RK: So what is The Urban Nerdz’s goal to break that? It seems like in your lyrics you have a definite underdog theme. rather, how do you plan on breaking that down?

Mr Campbell: Because as young men of color that “rap” but do not consider themselves “rappers”, we are breaking boundaries just by being mentors… We both have college educations, and come from immigrant family backgrounds.

RK: What kind of mentoring do you do? And is that part of The Urban Nerdz brand?

Mr Campbell: Yep, giving back to and educating the youth is where its at dude. We allll have to give back in some way shape or form… imagine what happens when you have a bunch of people just taking, taking, taking, and looking for handouts and opportunity…. eventually the water will dry and the water will be filled with leaches. We are into doing artistic workshops with the youth. Essentially helping them to find and keep the creative juices flowing.

RK: That’s great. Before we finish up I want to find out about your new project NABRU that you released over the summer. What are the themes behind that work?

Mr Campbell: Honestly that was a lil side project for us to experiment. The producer Eric Jamez formally known as Zyther, is young producer who contacted us about creating some history. I MrCampb3ll, have had this spitting over house, trap and dub for sometime now and when we met Eric we HAD to make it happen! There is no deep concepts with this one, because we just had some shit on our chest that we had to get out… so as you hear is how it is…

RK: Nice. Do you have anything coming up? Projects, shows, clothing lines?

Mr Campbell: Ahh we have a few shows were in the process for booking this fall like college fest, and a few other University gigs but they are still in the process of being confirmed. We are actually working on our next project which is going to be an LP…. details coming soon. A few singles and collaborations in the mix. Also we are working on getting some visuals from La Naissance De Jezebel and NABRU in the gumbo pot. New merch and tour in 2014… boom!

RK: Nice! Looking forward to it. Anything else you want to add?

Mr Campbell: Ahhhhhhh…. make sure to tell granny to put ice in her prune juice!

RK: Haha will do. Thanks for taking the time to chat!

Mr Campbell: Yes sir, I appreciate you giving me the opportunity!