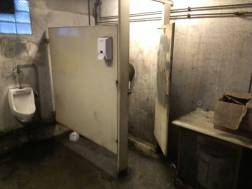 Every day is the same. You may be reading this on the commute to work and possibly you will agree. Depressing monotony breeds lives of nondescript mediocrity working for someone you hate, or in many cases, have never met. I am certainly not here to tell you how to live your life. I am here however to explain that things could always be much, much worse.

I look at myself in the mirror every single day before setting out to a job I hate and I think. “You coward”. It’s always easier to end up working some grinding job that slowly kills me mentally and physically whilst at the same time convincing nobody that one day I will become a writer or musician. But this never happens. In my free time I am too exhausted to think and my activities are restricted to the lifting and setting down of pints. I am one of the herd and that’s evidently how it is going to stay. Self-loathing and a regular paycheque. All held together with alcohol. Welcome to the 21st century.

It was a foul day when I turned up for my first shift at the bookies. Broadways stood grey and desolate in an area of East London that gentrification had yet to “bless” and with head fogged from the previous night’s excesses I march to a job I already do not want to do. It’s hard to explain why I ended up working in a betting shop as I have absolutely no interest whatsoever in the world of gambling but then nobody seemed interested by my writing or music and I had to pay rent.

He spoke with the idiosyncratic meter that comes inevitably to those who have done the same job for too long.

“Sure I will do it now” and off I went to embark on an activity that would take two minutes off the never-ending day that beckoned.

A bookie’s bogs are a far cry from the Savoy in any case but these were something else. A clipboard with several vertical monograms boasted that the lavatory had indeed been cleaned and checked by the anonymous Latvian women who no one had yet met. Classic. Turn up at the start of the month sign “Magda” thirty one times then do whatever you like for a month. Even if the company calls the agency the receptionist is Magda. The boss is Magda. Her three fucking daughters are Magda and they all hate you for giving them the “opportunity” to work from 3am til 5pm scrubbing out betting shop toilets throughout East London. So Magda was gone and I was here. The smell is what hits you first, a combination of the sweat of loss and desperation. And then there’s the booze. Monoliths of spent special brew frame the cubicles for those that even the pub won’t touch anymore.

And so with grim trepidation I pushed open the first cubicle and there he sat. Eyes grey in death. Mouth slightly upturned as the needle sagged low in the crook of his arm. This was where he came to take the final hit and now there is some corner of a bookies’ toilet that is forever England, to paraphrase.  Actually he looked pretty Turkish. The boss was told. The ambulance came. We all went to see the security officer to get reprimanded for not checking the toilets enough. Later on I ventured to look into the other cubicle but it was merely overflowing with shit and piss. Wonderful.

This was my first day.

I had got so drunk after the shift that even I worried about my outer appearance as I made my way to work. Looking like a George Romero extra and sweating single malt I strode through the doors with the thought of p45 at the fore of my mind. I needn’t have worried as I seamlessly blended in to the ambiance of the place. Small vignettes of excitement would pepper my brief career as a bookie. Aside from that the job is duller than any job you can think possible . You see gamblers are idiots but very auspicious idiots. Though they lose day upon day they feel that the gods of luck dictate that they should maintain their endless cycle of losing money to a strict timetable. Thus you can effectively time your day’s work to the second. It never changes.

The toilet was a constant source of interest to me. Ever since the discovery of the porcelain martyr of the first shift the lavatory held a mythical status. The bog giveth and taketh away. It was in constant use though. Junkies, drinkers, tramps and prostitutes all called its Formica walls home from time to time. With every flush she groaned with the weight of expectation. Then finally she gave in. After inspection it turned out that it was a discarded skag needle that led to the terminal blockage but I knew that she had simply had enough. She was as much a member of staff as anyone else that works in a betting shop. Job description:

The only difference was that she never complained about it. Now she groaned her last and burst her banks in a final act of defiance to the establishment. There was shit everywhere. The floor, the ceiling. Up, down and all around.  The gamblers seemed unworried as one inch of sewage coated the floor upon which they stood and watched racing. The smell of years of neglect is indescribable. The shift still had two hours on it. I called head office to inform them of the situation fully expecting to close early. The boss said he would sort everything and an early finish beckoned brightly.

Half an hour later everything was sorted out. His name was Nigel. He had come from Reading. With mop and antibacterial tablets he did a manful job of mashing the shit deeper into the carpet and adding the smell of bleach to the already overpowering cocktail that covered all. When he’d finished I said I was going to close up. This was met by consternation.

“But it’s fine now mate, you can trade”, he stammered

“It still smells of shit pal. Isn’t it a health risk?”

I chose to ignore the good doctors’ analysis of virus transmission. For now the sewage was seeping through the wall.

My dream of home had gone. I could have cried. But no, there was one last throw of the dice. No running water had to be illegal, surely. So triumphantly I called the boss and explained act two of the drama. What followed was a brief conversation in which I was to find out that whatever the magus from Reading said was gold. If he says you can trade then you can trade. Then dial tone.  I turned to Nigel:

“But there’s still an inch of shit everywhere”

He eyed me with the malice of an artist receiving fist hand criticism of his work.

And with that he left. I went to the office and bought water for the shop and a pack of cans for me. I charged both to the company account. Pricks. 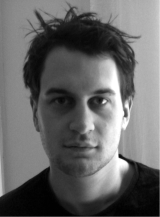 Louis Rive was born in London, England but raised in Edinburgh, Scotland. He infrequently attended George Watson’s College, Edinburgh before leaving early due to “irrevocable differences with the staff”. He studied Ancient History to MA level at the University of St. Andrew’s writing his final dissertation on the development of the toilet in the ancient world.  Louis has been exposed to the working world since he left school aged 17 and has to this day worked a plethora of jobs.

Despite holding an MA from one of Europe’s top educational institutions, Louis has not gone down the road of many graduates in getting a “proper” job but instead continues to work many “dead end” jobs in an attempt to stave off the 9 to 5 lifestyle. From supermarkets to bookies, it is his experience within the lower reaches of employment that forms the basis of his writing.

An aspiring musician Louis is very interested in traditional music from Scotland and the wider Celtic world (aka Ireland). He is a fully trained cellist and also plays banjo and guitar to a good level. Currently residing in London, he plays in renowned Scottish music act, Deep Fried Fiddle. Alongside music, writing has provided Louis with an outlet to share his stories and vent his frustration at the often-ridiculous world of work.